The Algarve is the southernmost region of mainland Portugal and covers an area of 5,000Km². With 200 Km of Atlantic Ocean coastline, it has a climate similar to the Mediterranean. (more about the climate)
The population is over 450,000 inhabitants of all nationalities, distributed through 16 municipalities and settled mostly on the coastline. 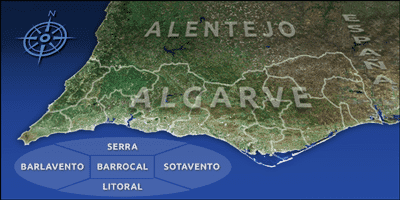 The Al-Gharb (the West) was for 5 centuries ruled by the Moors and was the last Arab stronghold in Portugal. In the mid 13th Century it was integrated into the rule of the Portuguese Crown, when D. Afonso III was proclaimed “King of Portugal and the Algarves”, dimensions being the only difference in relation to the rest of the country.

The architectural heritage inherited from the people who have lived here is very visible in the monuments that survive after the great earthquakes of the 18th Century. Magnificent tiles and the uniquely hand designed chimneys are some of the timeless symbols of the region.

Today, the Algarve is synonymous with the sun, beach and tourism. Its fantastic coastline is unquestionably the essence of this region. But there is certainly much to say about the extent of the Algarvean province, which is divided into two horizontal zones – Barlavento (west) and Sotavento (east) and into three vertical zones – Litoral (coastline), Barrocal (hinterland) and Serra (hills).

The Barlavento (West) has a rocky coastline indented with beautiful, intensely colourful rocky bays and hidden beaches. The Sotavento (East), on the other hand, has a gentler coast composed of extensive sandy beaches, with more amenable climate and slightly warmer waters. The Litoral is dominated by high quality tourist complexes, commercial and leisure areas with their restaurants, bars, hotels and shops. Amongst the attractions most sought after are the numerous leisure activities, plus a very animated nightlife.

The Barrocal (hinterland) is the interval between the Litoral (coast) and the Serra (hills), unspoiled and rural, with its fruit trees and indigenous vegetation, it is where a mixture of old and new customs are some of the most typical aspects.

The Serra (hills) is the true “undiscovered” Algarve, intact and captivating. The promise of adventure comes true, walking the hills and mounts, fraternizing with the inhabitants and discovering century old customs. Here is to be found the Algarve Folklore – popular dance and music – with its own style of dress and use of instruments that intone a special brand of happy melodies. During the summer months, these groups perform in various Feast days and Saints’ Days all over the Algarve.

Not to be missed is learning how to distil medronho (100% alcohol distilled from arbutus berries) and diverse liqueurs. The boroughs of Tavira, Silves, Lagoa and Portimão are distinctive for their orchards, a legacy from the Moors. It is quite common to find the Algarve oranges being sold at the roadside, and their juice, gold and sweet like honey, is delicious. Figs, almonds and carob beans are also typically Algarvean and are principal ingredients in local sweetmeats. 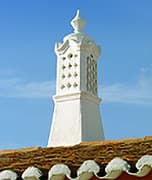 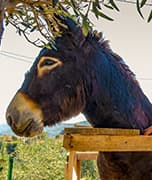 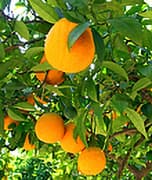 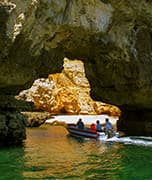 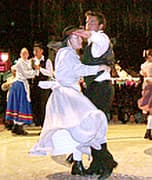 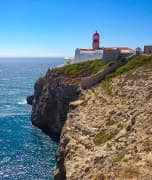 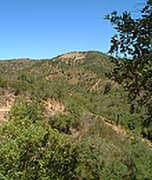 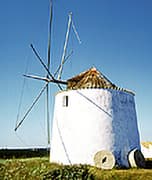 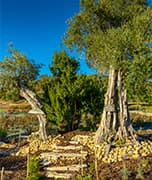 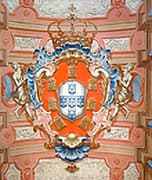 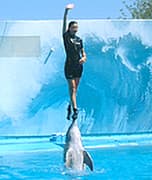 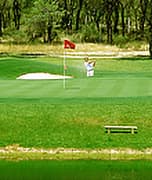 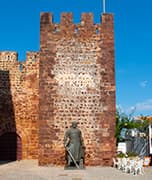 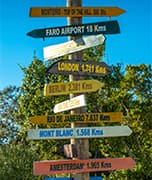 Handicrafts originate from nothing in front of our eyes, in the hands of talented locals, who sit in their sunny doorways calmly “employing” their art of working palm leaves into baskets, tablemats, hats and many other useful or decorative items. Although this is characteristic of the hinterland area, this activity is centred in Loulé. Lacework to edge beautiful tablecloths, sheets, household linens and some items of clothing is predominately made in Castro Marim, Olhão and Fuzeta. The art of weaving cloth, in wool or linen, displays the execution of some lovely designs for blankets and rugs, mostly produced in Monchique. Nearly all of the articles described, not forgetting the famous clay and porcelain ware from the Tavira or Lagoa areas, can be acquired in the numerous handicraft shops to be found in any of the tourist centres of the Algarve.

Ever present in Algarvean cooking, is the flavour of the sea or country, making any dish from the various regions something special and not to be missed. Here, also, you can enjoy the Fish Soups, Grilled Fresh Sardines, “Cataplanas” (copper steamers) of Fish or Shellfish, White Beans with “Buzinas” (large whelks), Fish Stew or “Carapaus Alimados” (cold horse mackerel with oil, garlic and onion). If you appreciate meat, try the Cozido de Rabo de Boi com Grão (Boiled Ox Tail with Chick Peas) and the Borrego Assado Arabesco (Roast Lamb Arab Style).

Discover more about each Algarve county